Impact investing: one eye on the wallet, the other on the planet 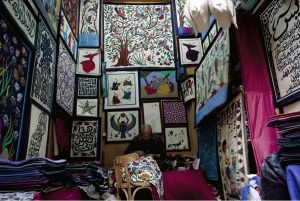 A Swiss start-up’s vision is to make saving money, while contributing to a fairer, greener society, as easy as shopping online. But there are questions whether so-called “impact investing” can go mainstream.

In a promotional video, Tillmann Lang, CEO and co-founder of Yova, appears in an armchair with a laptop. He clicks and scrolls, choosing the projects he wants to invest in (or not), such as renewable energy, gender equality, or rejecting weapons. Yova’s algorithm takes over, and a few seconds later, Lang’s tailored investment strategy is ready. It contains a diversified portfolio of stocks and bonds designed to match his personal values and financial goals.

Impact investments have the “intention of generating societal or ecological impact, alongside a financial return,” explains Lang.

This type of investing has traditionally been reserved for institutions and wealthy individuals. But Yova has opened impact investing to “everyday people” thanks to a technology that reduces costs.

The Global Impact Investing Network – a US-based non-profit organisation – estimates the current market to be worth $715 billion (CHF678 billion). This could potentially rise to $26 trillion (CHF25.7 trillion), according to a report published last year by the International Finance Corporation, a member of the World Bank Group.

Some 85% of respondents to a 2019 US survey from investment bank Morgan Stanley said they would like to invest sustainably, rising to 95% among millennials. The key to satisfying this demand is ensuring enough impactful investment products are created that achieve a reasonable market return.

Yova’s portfolios include shares from publicly traded companies. There are good reasons for this. Private equity investments are often restricted by high minimum investment requirements and low liquidity, which are not suitable for the general public.

Critics argue that new shares need to be issued rather than existing shares simply changing hands. Buying shares does not fund new, potentially impactful projects, and selling does not incentivise managers to change their behaviour.

Large fund managers, such as BlackRock and Vanguard, have leveraged their power in the markets to vote for environmental and social resolutions – for example, at oil and gas company ExxonMobil and firearms manufacturer Sturm, Ruger. But the funds have in recent years faced criticism for not intervening enough.

Lang explains that, unlike investors in mutual funds, Yova’s clients directly own the shares in their portfolios, allowing them to personally vote on strategic decisions at company annual meetings.

Impact investing is worth CHF50.4 billion in Switzerland according to the Swiss Sustainable Finance (SSF) association. Sabine Döbeli, SSF CEO, explains why this remains a small part of the CHF1.16 trillion Swiss market for sustainable finance.

Swiss impact investors traditionally invest in private projects in emerging markets, characterised by a lack of diversification, low liquidity and high risk. “You need a lot of local know-how, local due diligence, the right partners and you need to create deal flows. That always takes time,” Döbeli said.

But this is starting to change. A recent SSF survey found asset managers increasingly turning to the stock markets with their impact investments. Investment opportunities, rather than capital, are often a limiting factor. Döbeli also sees the need to improve understanding of the potential risks and returns.

She feels that the risk-return profile of impact investing could be particularly interesting for the more than 13,000 grant-making foundations in Switzerland. But strict regulations governing how foundations can invest money could prove a limiting factor.

By targeting retail investors, leveraging the scale of public markets and automating processes, Yova has been able to grow fast. After doubling its number of clients in the first quarter of 2020, the start-up announced in April that it had raised further funding and was planning international expansion.

With Yova, Lang hopes to help advance transparency in the financial industry. Any kind of investment – whether impact investing or not – has an impact, he says. “Even if you just leave money lying around in your bank account, your bank still does something with it.”

Lang wants people to come to a better understanding of how their money is invested and “ideally funnel it in a good direction.” Armed with this knowledge, people could then ask more questions of their banks.

“We need to showcase that impact investing isn’t impossible, that it doesn’t cost more, you have the same return, the same risk, and in addition you have a great experience around it. That will put a lot of pressure on the industry to become more transparent, to become more sustainable.”

Impact investing aims to directly finance solutions to global challenges, such as climate change or poverty.

For example, rather than investing in the least unsustainable producer of fossil fuel or simply rejecting non-renewable energy all together – impact investors might seek specific investment opportunities in providers of renewable energy.

Unlike philanthropists, impact investors expect a financial reward from employing their capital to improve the world. If financial gains are later reinvested, this could also help scale up ethical investing.

It is therefore not surprising that impact investing is often mentioned as a tool for helping close the estimated $2.5 trillion (CHF2.4 trillion) annual funding gap that the private sector is expected to contribute towards reaching the United Nations’ Sustainable Development Goals by 2030.